py-veo is a Python module implementing the VEO API for Vector Engine Offloading, AKA veoffload. It allows the use of the VE from Python programs, even interactively and via IPython or Jupyter notebooks. VE “kernels” must be written in C, C++ or Fortran.

I wrote py-veo a year ago, presented it first at ISC 2018 but the project was quiet for the past half year. This post presents some recent changes and extensions of the API as well as the new option to build VE kernels from inside Python code.

The NEC Aurora Tsubasa Vector Engine (VE) is a very high memory bandwidth vector processor with HBM2 memory in the form-factor of a PCIe card. Currently up to eight VE cards can be inserted into a vector host (VH) which is typically a x86_64 server.

The primary usage model of the VE is as a standalone computer which uses the VH for offloading its operating system functionality. Each VE card behaves like a separate computer with its own instance of operating system (VEOS), it runs native VE programs compiled for the vector CPU that are able to communicate with other VEs through MPI.

A second usage model of VEs lets native VE programs offload functionality to the VH with the help of the VHcall mechanisms. The VH is used by the VE as an accelerator for functions it is better suited for, like unvectorizable code.

The third usage model is the classical accelerator model with a main program compiled for the VH running high speed program kernels on the VE. A mechanism for this usage model is the VE Offloading (VEO) library provided by the veofload and veoffload-veorun RPMs. 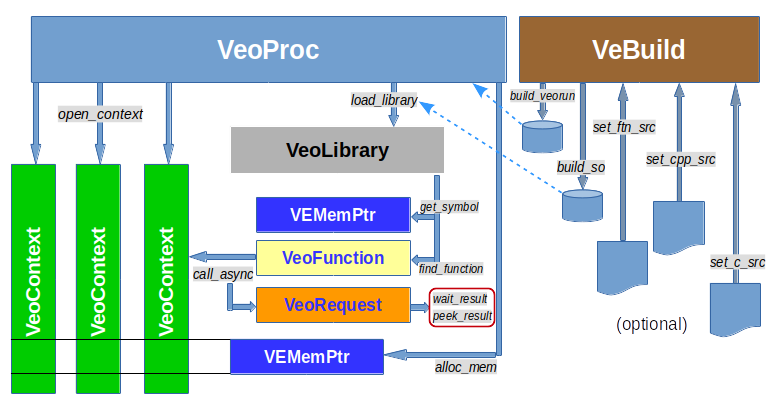 A VeoProc object corresponds to one running instance of the veorun VE program that controls one address space on a VE and enables its user to offload VE kernels. Each VE the user wants to use should have one VeoProc instance.

VeoLibrary represents a loaded dynamically shared object inside a VeoProc process. VE kernels can also be linked statically into the veorun program, that is a special case of a VeoLibrary.

A VeoFunction object represents a VE kernel (function) inside a VeoLibrary. Functions need to be located inside a library by invoking the VeoLibrary obect’s find_function() method, explicitly or implicity, by accessing an attribute of the VeoLibrary that is named like the expected function.

A VeoFunction invoked on a VeoCtxt returns a VeoRequest object. The VeoRequest can be waited for (synchronous wait) or “peeked” at for asynchronous checks. A VeoFunction takes up to 32 arguments (currently artificially limited in VEO) and can pass back results, 64 bits as the function return value or on the function’s VE stack. The VE stack can also be used for passing arguments that are accessed by reference from the function (like all arguments in Fortran).

Simple VE kernels can be represented as strings inside Python and use the VeBuild class for compiling and building the dynamically shared VE library or veorun excutable. This is also an easy method to start playing with code on the Vector Engine.

Let’s consider the following simple VE kernel that calculates the average of a vector of double precision values:

This VE kernel must be compiled and linked as a dynamically shared object. We store the content into a file named average.c, compile and link it:

Now let’s prepare for calling the VE from a Python program test-average.py:

Here we first check whether the VE node ID was specified in the environment variable VE_NODE_NUMBER, if not, we use VE node 0. Next we create a process proc on the selected VE and a worker context ctxt. Lastly we load the previously created shared object into the proc process by calling its load_library() method.

Next let’s “find” the VE kernel function average inside the library and define its argument types and the return value’s type:

The argument types must be declared as primitive data types or their pointers. Don’t specify variable names, as often done in C function prototypes!

Now let’s create a NUMPY vector a that shall be passed into the VE function:

Currently the vector a is located in the VH memory, inside the Python application’s address space. We need to transfer it to the vector engine into an appropriate buffer:

Asynchronous buffer transfers are also possible, they would need to be queued into the VeoCtxt. The asynchronous alternative below also requires to wait or peek for the request req:

Finally let’s call the VE funtion and wait for the result:

When done, the buffer can be freed, anyway it would be released implicitly once the proc is cleaned up:

VeoCtxt can be closed by the close_context() method of the proc object, but that is actually done implicitly under the hood when the proc object is destroyed:

Using the VeBuild class we can fit the example from the previous section into just one Python file. This is often easier for little experiments or for using interactive Python notebooks like iPython or Jupyter.

The example below has been changed in some details, besides using the inlined C source for the VE, the NUMPY random vector a is passed on the stack into the VE kernel. This works for arguments that fit into the first 64MB page allocated for the VE kernel’s stack.

With OnStack it is possible to pass in and out arguments that need to be accessed by reference. Python objects that support the buffer interface are supported as arguments of OnStack. The initialization syntax is:

The little examples show the basic usage of py-veo, how to define functions for the VE, allocate buffers, transfer memory and call VE kernels. For further steps please read the documentation on github in the project’s README.md github.com/SX-Aurora/py-veo and look into the little tests in the examples/ subdirectory.